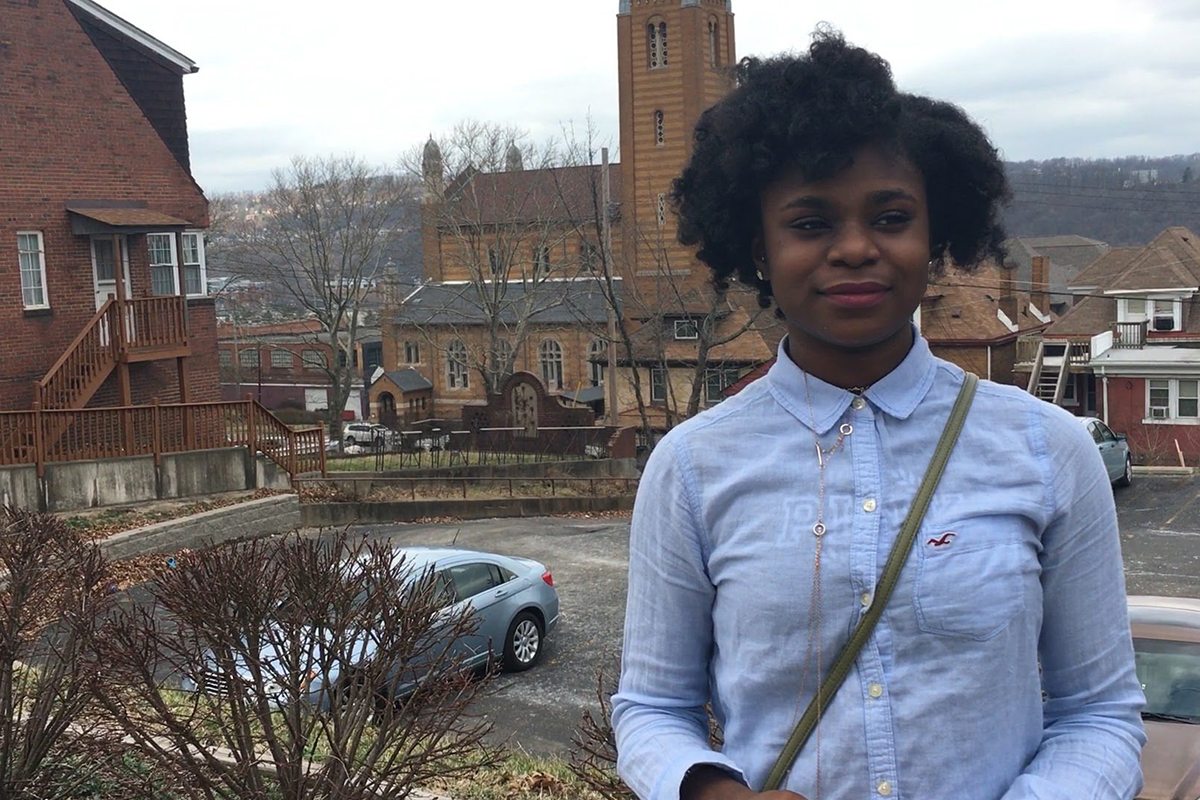 Tamia Law is a lifelong Clairton resident. She wants to see a Clairton that is safer and more supportive to all of its youth, not only the football players. (Photo by Njaimeh Njie/PublicSource)

I am from the City of Prayer, Clairton, Pennsylvania. A small forgotten Steel Town 15 minutes south of Pittsburgh, which is known as the High School Football Capital of the world. But I don’t need to tell you that. When I was approached to write a response letter to a young lady from Clairton who mentioned that Clairton is only recognized for football, never in a million years did I think I would be talking to you. God makes NO mistakes! Girl, I remember when you were born. Seems like yesterday, but clearly, it’s not. Your mother has been in my life for longer than I can even remember. She’s the big sister I never had.

One of the best things she could have ever done for you was sending you to Propel Schools. Not because Clairton High School isn’t good enough (shoot, I graduated from there, no one’s going to talk down on my alma mater), but because it opened you up to see and know different early on and look how great you’ve become. You’re focused, you have goals, you have dreams. You work hard for what you want and you go after it. At your age, I didn’t know what I wanted to be. All I really knew was basketball and that it was going to get me where I needed to be in order to figure that out. With good grades, something you know all about, and determination, I landed that full ride to college. The rest is sort of history.

One thing I will say is GO! Go far, travel, live, learn. Look at the people in our community who never really leave, let alone get a passport and travel. The sky’s the limit if you get after it.

You only have one thing to worry about and that is you.

Which leads me to the real response to your entry… Our community is our community. The mindsets, the houses, the schools, the mentalities aren’t necessarily going to change any time soon, if ever. This isn’t to sound negative, this is to bring home the truth. So with that being said, mind your business! I am not saying this in a mean, jerky way. I am taking that statement and applying it to my own life as well.

One quick little trip down C-Town memory lane. When you were just a wee little baby bear (Clairton Bear innuendo), girls’ basketball was on fire. I’m talking LIT! The Bears Den would be packed, so much so that people would have to stand just to watch us play. It was intense. The fans would travel and buy tickets early to see us take on the likes of a Charel Allen up the river in Monessen. It was on and poppin’ (I don’t know if people still say that, Tamia, but it fit). To summarize, we were the football team back then. We had all the Tyler Boyd hoopla and massive support for the community at the time. Sure, our boys’ basketball and football teams were good, but we were running it. Girls’ basketball in Western Pennsylvania was amazing in general.

We got all types of special treatment, but it wouldn’t have amounted to anything if we still didn’t put in the work. The will to put in work and to win was the blueprint for some of us to get to the next level and play in college, overseas and the WNBA. It was truly the initial outline that allowed us to be goal-driven and determined to be somebody in the next stages of our lives. The next level for us meant turning into great young women who were actually about something. Women who knew what it meant to be a part of team, have responsibilities and to be accountable. These are all great attributes to apply to your life and we practiced these qualities early on.

Can you think of a group or class that you have been a part of that you think will help you become a positive role model or leader in the future? My colleagues and I have turned into great mothers, great coaches, great businesswomen, great scientists, amazing nurses and the list goes on. You must realize, my dear Tamia, that your talents can take you to that next level if you stay focused. Not just with sports but with anything. I understand that being smart may not always be the coolest thing, but believe me when I say it will pay off. Think about this, not only Clairton, but the world sensationalizes sports and athletes. The world loves and worships those who can leap, dunk, jump higher, run faster and score points better than the average Joe. So, don’t get caught up in the limitations that are sometimes presented by someone who doesn’t have the same outlook as you. Stay focused on scoring in your own way.

The next level for us meant turning into great young women who were actually about something.

Tamia, it still comes back to minding your business and I’ll tell you why. You only have one thing to worry about and that is you. If you are taking the time to worry about the thoughts of others and what they are doing, you’re wasting precious time on getting Tamia right, making sure Tamia is good. The fact is, there is always going to be special treatment for others. There will always be someone who is smarter, or more knowledgeable, or gets the job done faster. Staying ready, continuing to learn and having a strong work ethic will allow you to be prepared in areas that you may not always be the best in. Never let someone outwork you. Sometimes people will be rewarded and you may feel it is unfair, but that can’t stop you from your own goals. Sure, I agree that other students should get the light shined upon them for getting good grades and such, but shouldn’t that be what’s expected of all in the first place? Sadly, it’s not the reality especially when we have parents who don’t care and things of that nature, but you’re not cut from that cloth, so focus on you.

Your ultimate goal is to say this is where I am from, and this will not define me. I will be great. Tamia, you can go back to Clairton one day and open the grocery store or create the recreation center, or whatever it is that you want to do because you will be successful. We can’t change the hood overnight, but we can change the type of role models that Clairton produces. Kids can grow up and want to be like Tyler Boyd and that’s great. He is talented and has put in the work to rise to the next level. But guess what, they can want to grow up and be the next Tamia Law, too. Tamia Law, the criminal justice graduate, lawyer, FBI agent.

We all know Clairton is the City of Prayer, but it can also be the city of naysayers, close- mindedness, and let’s face it — haters. All you can do is mind your business, pray for those who don’t get it, and keep on moving.

Change will come, but it starts with people like you and me. We must be the change we hope to see by setting an example to all those kids who don’t think they’ve got a chance. We will show them that as young black women coming from Clairton that nothing can stop us. With projects like this, we are doing it now. Believe it, girl! So, yes, we are from the Burgh. The 412. City of Champions, but we are really from Clairton. Clairton is where we have grown up, gone to church and school, made friends, lost loved ones, won championships, the list goes on and on. The rest is up to us. The story is still being written. Clairton is the city who made me who I am today and I wouldn’t trade it regardless of what others may think of our downtrodden town. It’s who we are, you and I.

Clairton will allow you to do two things: 1. Be a follower (do like the rest)… Stay in Clairton forever… Have regrets… 2. Inspire you to be a leader (be great, light your own path)…Write an amazing story… Change the world. We must never forget where we came from. You control your destiny and you are on the path of greatness. Who are you Tamia? Who are you? Stay focused, stay kind, stay thankful, and go get ‘em!